I am trying to find the words to express a magic so ordinary and mundane that it make it all the more magical.   Sometimes the simplest moments are the most profound. If anyone is lucky enough to take it for granted, then more power to them. I have mused before about how I have taken for granted the gift of multiple friendships that have lasted over several decades. When I start having a solo pity party complete with poppers, I am given a lesson to remember the gift, not the wrapping paper.

Triangles are magical, powerful, and mystical. They exist in sacred sites throughout every culture on this little blue orb that is circling our cosmic light bulb.

Father, The Son and Holy Ghost. Three wise men. The triangle is found in virtually every culture and is the most stable of geometric symbols. Squares may collapse, circles may never end, but the triangle balances onward. In quantum thinking it is representative of the of the unity, that, when united, become powerful beyond each individual separate force. But it is also much simpler than all of that.

We form a perfect triangle, the three of us. Of course, it is a triad. There are sixty degrees we each bring to the triad. It is important that we bring an equal balance…Different gifts to be put on the table of friendship. This perfect triangle is an art form. It is a study in divergence, convergence, and dynamic tension.

And oh, what a triad it is.

Spontaneously and as we have in the past, we arranged a reunion. We manage this about every five years, give or take a month or two. And, I might add, it is totally coincidental. Perhaps we just need a five-year fix. Perhaps deeper. Perhaps not. But we get in contact and things flow toward another gathering in perfect time.

We have been to each other’s weddings (both right and wrong) and rejoiced and mourned and buried parents as we take the con from those generations. But we all knew those parents. And they knew us. We were always welcome at each house as if we were family. Sleepovers, birthdays, high school was the backdrop for the foundation that remains rock solid — like the pyramids. Through hugs and tears and everything in between, the reconnect is instant.

During this trip, we honored the remaining patriarch from that era who knew all the dirt. (Well, most anyway.) (Well, maybe only some.) And, God bless them, they knew us. For me, it was an unspoken safe harbor.

So coming back to an empty house with the kids at college and the husband of my dreams working in another state, I bask, (OF COURSE), in the glow of my not taken for granted friends.

I was too old for Sesame Street. Though I hold a fond memory of my long estranged elder brother singing “C is for Cookie” as he was washing his 1963 POS Chevy Nova in our suburban driveway. The whole concept was charming and very innovative. I was of the WGN, Bozo Circus, and the “Ray Rayner and Friends” generation. It kept us occupied while our parents chased the middle class illusion.  By coincidence, (and there are no coincidences) there was a show on the television about Jim Henson and his beginnings with the Muppets. A marionette meets a puppet and it was borne out of his mother’s green cloth coat made to use in milk commercial. He, like Pinnochio, “got no strings” and an entire generation grew up thinking Kermit was a real frog. I don’t think he asked to borrow it. We creative types take a lot of poetic license. But nonetheless a new and unique media was borne. And the Muppets were fascinating, entertaining, irreverent, and fraught with adult humor. It charmed my wounded, cynical, early teen self nonetheless.

I remember vividly where I saw the “Muppet Movie”. It was at a drive in theater that is now yet another strip mall. Gone but not forgotten. It was on a date with a guy I thought was “the one”. Turned out I just loved and wanted to belong to his family. But, Kermit rode a bicycle! Irreverence meets culture and creativity. And I am transported back to that happy time of illusion whenever I hear the song “Rainbow Connection”.

“Why are there so many songs about rainbows?

And what’s on the other side

And rainbows have nothing to hide.

So we’ve been told

And some choose to believe it.

Some day we’ll find it

The lovers, the dreamers and me.” (Paul Williams)

When I was dating my husband and we endured a mandated separation from each other, there were a couple of fascinating signs we were meant to be (besides his kisses). The first was that I saw at least fifteen rainbows in a two-month period of his absence. I’ve probably seen a dozen total in the ensuing twenty-seven years. It was definitely a huge metaphorical sign for me. Color was coming into my life.

The second was a night where I was sitting and feeling the ache of our necessary separation. As I sat looking out of the window of my balcony there was a storm. It was not just any storm. It was raining, thundering, lightning and SNOWING — all at the same time. I have never seen anything like it before or since. And, all I could think of was that I wished with all my being that we had been sitting next to each other, holding hands an watching this amazing celestial show.

Turns out he was doing the exact same thing.

My gals and I share the cultural references of our time in shorthand. Barnaby’s. Grooviness. Marijuana was for the “freaks”(non editorial statement). There was still shop class. Those cultural references stay to this day. Sometimes it need only be a look. Or one word. And we burst with laughter, or tears, or anything in between. Our husbands watch with puzzlement and bemusement. Sometimes, they get drawn in. I will never look at “full coverage” on a rental agreement without a grin. Thanks, Jim.

So, amidst the fun, laughter and realizing we never are really separate, we all caught up. But I never made pom poms. My life was over for at least a day and a half. I thought I wouldn’t be accepted anymore and I bring that up every time for a giggle…

They kept me around just the same. The triangle of friendship stayed in tune. We still strike the chime with our magic wands.

That’s just what rainbows and triangles do……

My husband and I have had a major shift in our lives over the past three years. I had alluded to it rather cryptically; both the highs and lows. There were both rights and the wrongs. And the roller coaster rolls on. And the wheel of life keeps turning ever onward.

My “sisters” were curious and I was cryptic. Not intentionally. But I knew that the time would present itself when the story could be told.

And it did. After a wonderful day, full of touristy stuff, a great sail on the lake and a wonderful dinner. I knew it was the right time. (One of the “sisters” had the great discernment to marry a gourmand and wine connoisseur). We sat down….

It took about an hour and a half to do the tell. There were tears (mine), hugs (ours), outrage and compassion (times four) and the pillow a soft landing of friends of forty years of that roller coaster that is life. They even forgave me for the wine glass I broke amidst the tale (and a too generous oenophile) Still owe you that one, Steve.

The next morning, when I was wondering who put all those little socks on my teeth, the besties came up, hugged me, and asked, “What can I do?”

With that simple question they had just done it. Again…..

I love you guys. Words don’t suffice. Let’s just keep the friendship DNA cooking. It’s good. I truly hope that everyone has some of IT in his or her cadre of friends. IT is the rainbow connection.

It is simple magic.

No, it is HEAVEN  in the everyday and it is there to be noticed, noted and not taken as a given.

Thank you, Jim Henson. The lovers, the dreamers, and you…. 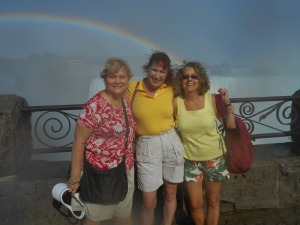 After four generations in Chicago, a big city transplant to the "wild west" of western South Dakota in 2004. Mom, domestic goddess, CEO of my world and fond of musing about what is becoming the second half of my life. It's a big old goofy world.
View all posts by marysigmond →
This entry was posted in Finding Normal, From Where I Live, Life as I Now Know It, Uncategorized. Bookmark the permalink.